Posted on March 5, 2018 by palmbeachpetdr 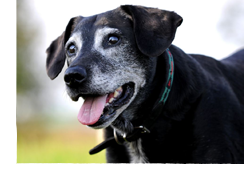 In dogs with Cognitive Dysfunction syndrome, the brain undergoes a series of changes that result in a decline in the mental faculties associated with thinking, recognition, memory, and learned behaviour.

Other conditions may mimic Cognitive Dysfunction

Some of these symptoms may be due to age-related physical changes and not to cognitive dysfunction. A medical condition such as cancer, infection, organ failure, or drug side effects could be the sole cause of the behavioural changes or could be aggravating the problem. Thus, medical problems must be tested for and eliminated before senile symptoms are attributed to cognitive dysfunction syndrome.

What is the cause?

Research on the aging canine brain reveals a number of pathogenic processes that could account for many of the symptoms of cognitive dysfunction syndrome.

How is it diagnosed?

There is no specific test for cognitive dysfunction syndrome. The number of symptoms the dog exhibits and the severity of the senile behaviour are important considerations in making the diagnosis. An MRI may show some degree of brain shrinkage, but the test is not likely to be done unless a brain tumour is suspected. Awareness of the diagnosis makes it easier to understand the dog’s behaviour.

Can it be treated or managed?

4) SENSORY STIMULATION (such as massage and brushing)

Treating CDS is possible, with the right diagnosis by your vet. If you ever suspect that something is not right with your pet we advise you book an appointment with Pet Doctors on 5576 0400.